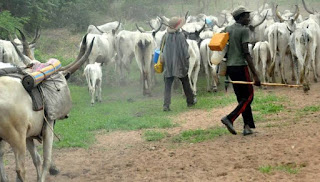 The heinous act  was perpetrated on Sunday when the deceased was on his way back  home from his farm when the suspected  herdsmen accosted  him for no reason, overpowered him and stabbed  him  in the neck .
The herdsmen reportedly abandoned him after reportedly waiting for him to bleed   to death.
A 76-year-old man had escaped death after suspected  herdsmen attacked him in the head, two weeks ago.
The man had gone into a coma but was revived at the hospital two days after the attack.
Attempts to get reaction from the Police Public Relations Officer in the state, Abimbola Oyeyemi, failed.
He could not be reached as of the time of filing this report.
However, the Olu of Alabata, Chief Sanusi Waheed, who oversees the affected  Adao community  as one of his consenting communities, stressed the need for quick government’s  intervention to abort the plans of the youths to foment trouble. He added that the herders had crossed their boundaries.

Waheed said, “The Fulani have crossed their boundaries and we can’t condone their excesses anymore, there is a need for an urgent intervention of the government in the Fulani/herdsmen problems in this community and country. We would do all within our powers in communicating our plight to the government.” WhatsApp Not Working As Users Unable To Send Or Receive Messages